Low-Code or No-Code for Software Development?

Did you know that Gartner estimates that by 2024, low-code/no-code application development will be responsible for more than 65% of application activity? That’s not all, they also predict that 75% of large enterprises will be using at least four low-code development tools for both IT and Citizen-Development initiatives by 2024.

But what does this mean? Is this the revolution in the IT industry everyone talks about or yet another fad that will evaporate as many other buzzwords we are exposed to every year?

Well not according to the aforementioned numbers, but let’s dive deeper and find what Low-code is, why it’s such a big trend, some great tools to consider today, and some potential drawbacks to keep in mind.

What is Low-Code / No-code?

The most elementary explanation of Low-code / No-code is as follows:

“Low-Code is the new approach that uses various tools and applications to create other applications or replace some parts of an existing stack. To make a final product with drag-and-drop like approach, a visual graphical way to creating working software or program, accessible to everyone, not just software developers.”

Of course, this is not entirely a new concept as some would like you to believe, it just picked up steam lately due to some amazing improvements in recent years.

It would be remiss not to discuss Excel, for it elegantly shows the principle in action and also proves that the idea of Low-Code has been in the works for many decades now.

Excel is one of the oldest (and one of the most used) software that allowed non-computer-scientists, i.e non-developers or a new term – citizen developers* – to essentially make a computer create a simple application. Creating spreadsheets is remarkably similar to writing your own basic “apps” with a “code” of requirements – what it wants Excel to perform.

These encompass everything, from basic equations in certain cells to complex spreadsheets that automatically calculate/complete or even create sales taxes or invoices. All based on predefined cells receiving input information and then running mathematical computation to its logical conclusion. 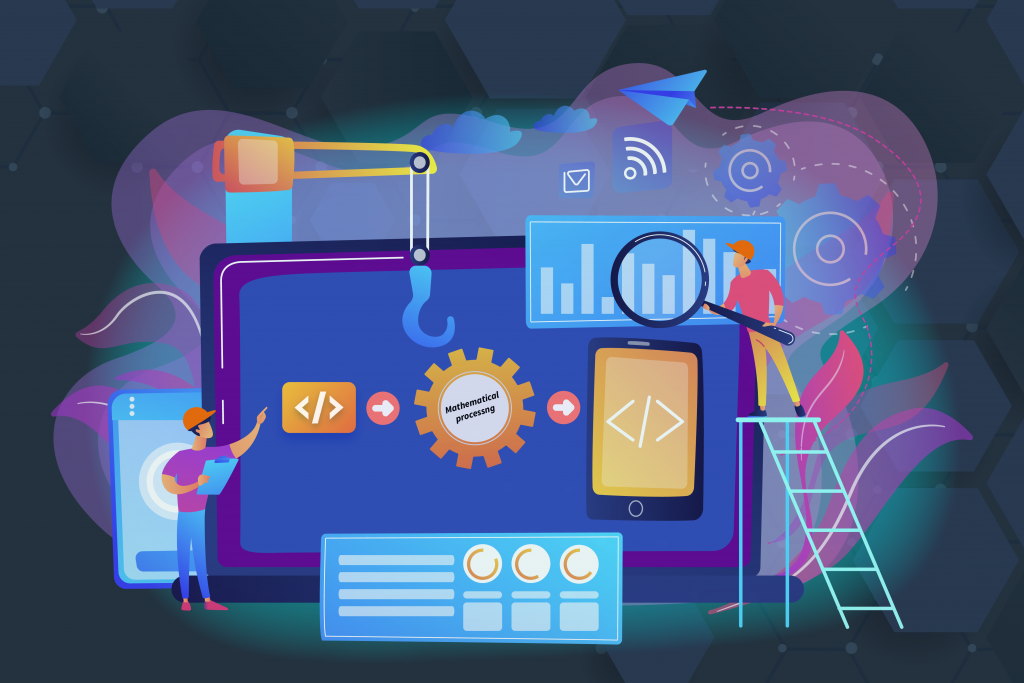 In essence what an application is already: Input action > mathematical processing > Desired outcome.

This way a person who can use Excel can create these mini-applications that do something, i.e develop applications.

Why Low-Code? What is a Citizen-Developer?

A citizen developer is a get-all term commonly used for people who are not necessarily professional IT employees – programmers. These can be everyone from HR representatives to business developers, sales, marketing, finance, and everyone in between.

Subsequently, Citizen Development is the process of building low-code/no-code applications to solve IT problems by citizen developers.

Matter of fact this is its main overwhelming advantage – the ability to liberate your IT team for more pressing matters, but it is not the only one. 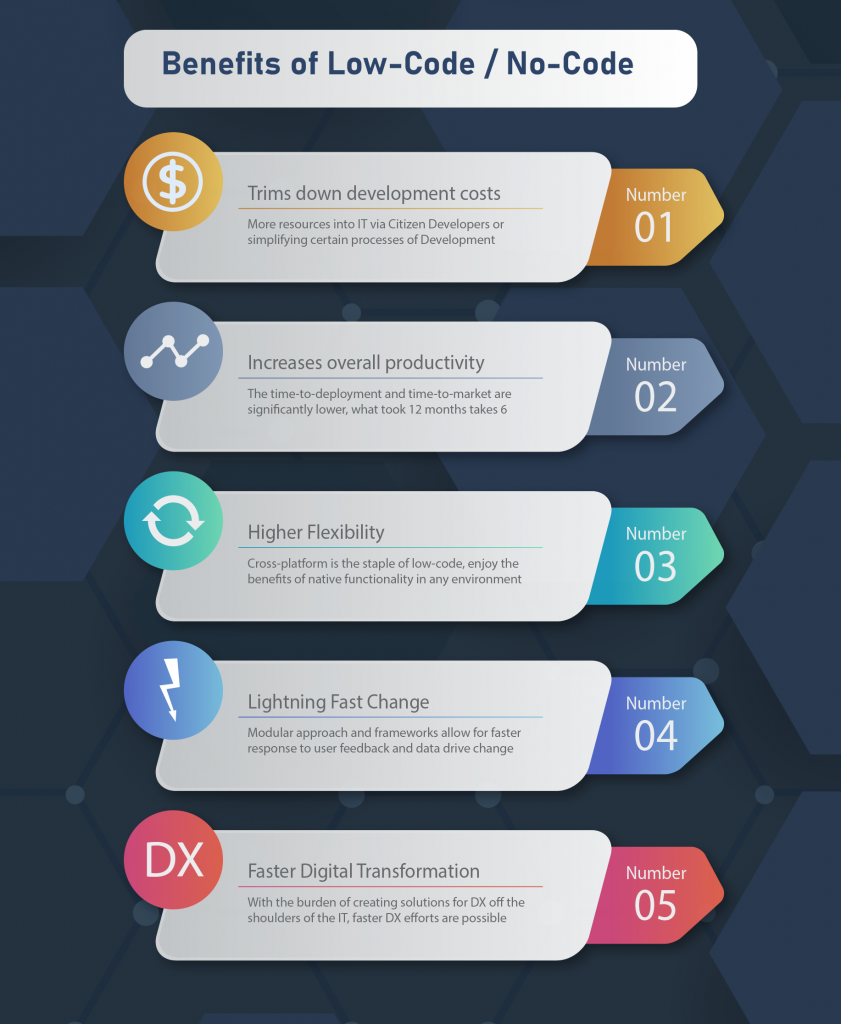 The ability to utilize non-IT personnel to solve IT-related issues by itself is colossal. It easily trims down costs incurred in the development of relatively simple applications.

It increases the overall productivity of your enterprise, digitally transforming and accelerating all of your processes requires A LOT of investment both in work hours and budget.

Many if not all low-code solutions are built with cross-platform functionality in mind, this, in turn, ensures higher flexibility, your sales can develop their own application and have it work both on mobile/IOS or as a web app.

By bypassing the need to employ a dedicated developer team, you’re significantly cutting your time-to-market timeframes and releasing faster! And because it’s modular and built under frameworks, change is lightning fast to incorporate. Any user feedback can be acted upon with data-driven action almost within minutes after receiving said feedback.

All right but what’s the true potential of this setup really? Let’s go through some examples.

WordPress is the biggest most wildly known CMS with a huge feature list and a no smaller list of problems going with it. Cause of its open-source nature there’s a wild debate on its cybersecurity drawbacks.

It still stands that anyone with a rudimentary understanding of how a computer works can create their own unique-looking website with a plethora of functionality from a comment section to eCommerce paying systems, or even advanced chatbots. All done with little or no code seen by the ultimate user.

Our comprehensive suite of tools is aimed at enhancing digital transformation efforts as well as pushing the no-code innovation one step at a time.

RocketApps – This tool allows its users to automate business processes via low-code resulting in truly powerful no-code apps with a shortened development effort. Just design your entire process roadmap using BPMN 2.0, and then use a drag-and-drop graphical interface to build your desired software.

SmartProcess – A workflow automation tool with an inbuilt BPMN builder, automatic task assignments, content integration, and everything you could need to plan your whole enterprise. A fit one solution aimed to replace most reliance on third-party solutions like a separate BPMN suite, DMS, monitoring, workflow provisioning, and much more!

And that’s not all, these were just some of the things our suite provides.

Other Low-code suits to consider:

Microsoft PowerApps – We cannot forget the absolute giant that Microsoft is and its contribution to the movement. Their PowerApps platform is the solution to join the massive network from Office 365, Dynamics 365, Azure, Outlook, OneDrive, and their entire assortment under one umbrella!

Salesforce – Yet another undisputed leader, this time in CRM solutions is also part of the low-code innovation. The Salesforce Platform allows its clients to automate processes across various in-built systems. With easy integration from third-party solutions and embedded visual workflows, this platform lives up to its reputation.

Appian – A platform that unlike many of its peers, doesn’t segregate by application, but by industry. Their platform claims to be the answer to no-code problems for almost every industry you can think of, and Gartner yet again seems to agree with putting it among the top players.

Is it practical and should developers be worried?

Is Low-code/No-code a viable solution?

Ultimately low-code solutions are an amazing innovation pushing the boundaries of software development, but they are still limited in scope by their very nature.

These tools are very advanced and complex pieces of software designed by developers, and as such, they can only perform tasks previously encountered by their creators. Known problems and solutions, Low-code by design work similarly to antiviruses, they rely heavily on issues that are widespread and thus understood.

That’s why many market giants are focusing on solving certain industry challenges, rather than trying to provide a singular platform for everyone (well except Appian of course). We took the same approach, we focus on certain parts of the IT sphere, but we do it well.

If met with an issue or a problem outside their purview, they can be understandably lacking. As everyone knows, software development is incredibly dependent on unique circumstances and challenges. 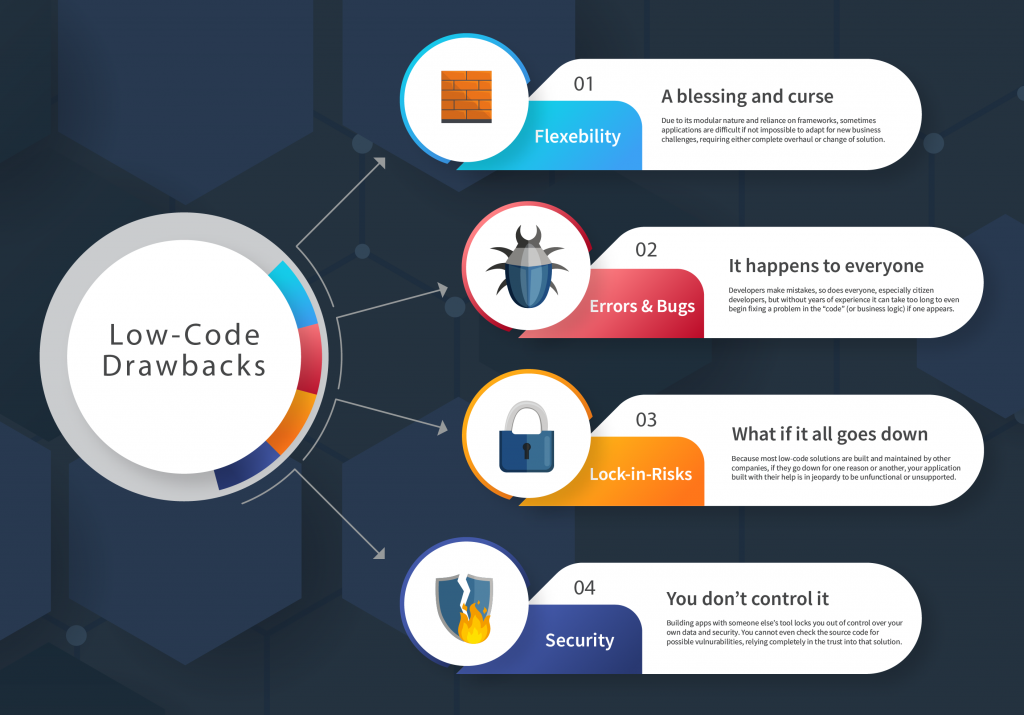 No-code relies on the assumption that we perfectly understand the problem we are facing and all the potential challenges or issues that will ever arise. Which is not the case. After all, that’s why we have developed software delivery processes as MVP or SLC. Or why Agile is a thing.

Should developers be worried about Low-code solutions?

Absolutely not, disregarding the fact that these solutions will still need to be built by the developers themselves, they simply cannot solve every challenge there is.

Low-code is best suited for companies overly worried about time-to-market and time-budget constraints. It will be relatively faster and cheaper to develop an application using these solutions.

At least compared to employing a full staff of developers, but true innovation, something never-before-seen will always require a seasoned developer to write the “never written” before code.

Think of it as using a coffee machine, it can serve a dozen types of coffee, from Mocha to Cappuccino, to Americano, etc. But at the end of the day, it will never phase out a professional barista.

Citizen Developers make mistakes – everyone does

Another problem is the inherent faulty nature of humanity, even with as much automation as possible, it would still ultimately fall to the end-user, the no-code developer to “develop” the app, and errors or basic mistakes are bound to happen.

Even seasoned developers make mistakes or errors in judgment, it’s easy to say – “just don’t make mistakes” but that is not possible, yet again there’s a reason why clean-code practices exist, even for experienced software developers.

And unlike a seasoned developer, it could become exceedingly difficult to find or even understand why some of these issues can appear for a citizen developer.

Low-code solutions are the best-fit tools for non-developers who aim to get their application out solving problems with as less development time as possible. It’s the best choice for those who have a revolutionary idea but a limited budget to hire a full-fledged team.

With one caveat of course:

The Low-code/No-code industry has shown tremendous growth over the past decade, but as mass adoption is taking place, it will only add to competition and increase it. Consider how WordPress has conquered the blogging industry, everyone is using it, thus losing any notion of originality – eventually ending up as yet more white noise, whereas unique, dedicated, and custom-built solutions (ex. medium) still prevail.

While low-code is truly a game-changer in many ways, it is not the answer to all of your problems. Software is, but what kind? To answer that question we suggest you consult with a bespoke software development team, it’s important to know where you’re investing your money before you do so, not after.

If you found this article informative or you want to get started with your own adventure with Low-code platforms, check out our demo with our own set of low-code advanced tools.

What do you think, is the IT world about to open a new chapter in how we see software development? Or is it going to be a flop like the quickly burning NFT market? Please share your opinions in the comment section.