OSX Summit and Expo – The Good, the Bad and the Ugly

For what I’m about to write here, some of you might take my head. Some will agree with this opinion. And some might simply ignore it. Nevertheless, I am about to write the whole truth and nothing but the truth about OSX Summit. 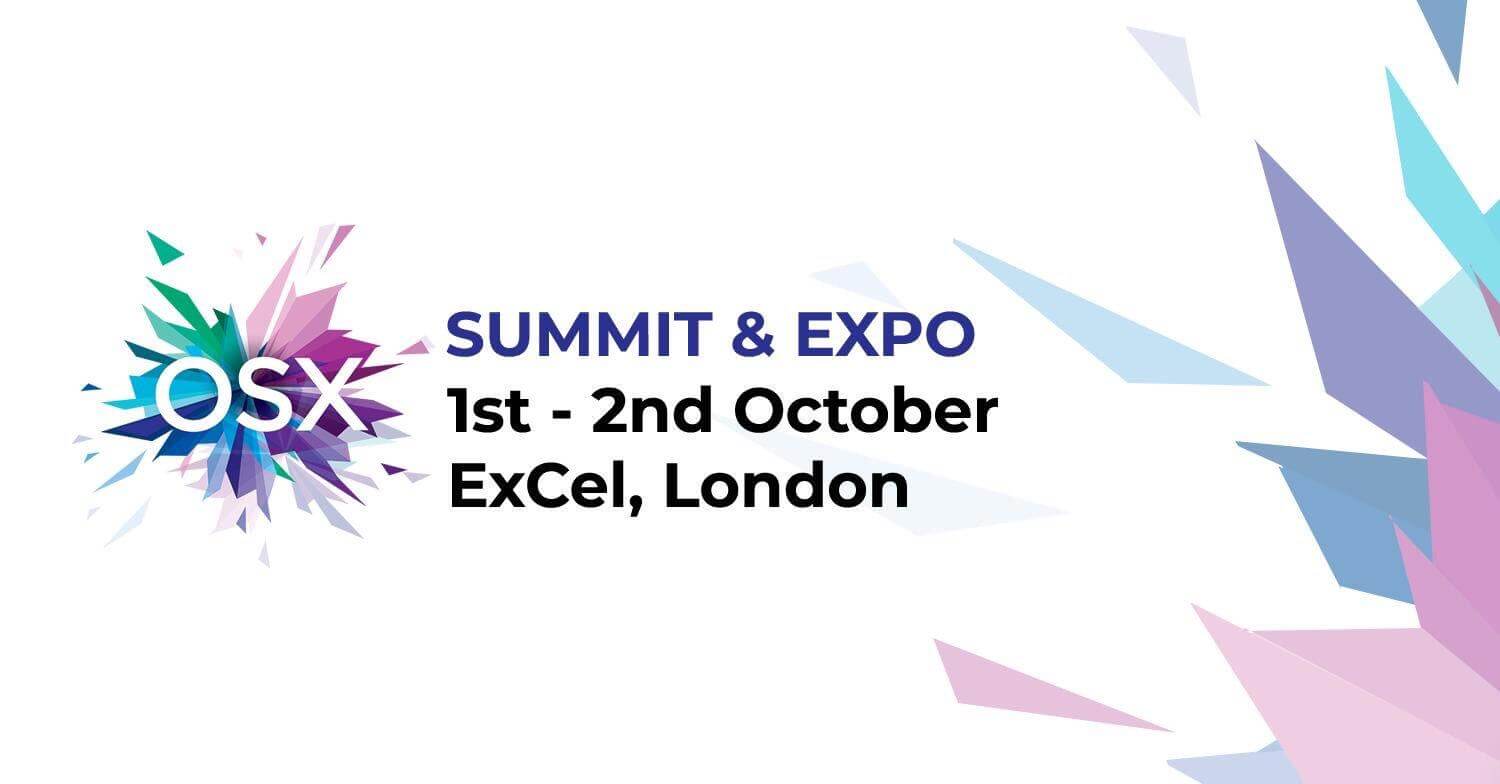 Since I’m not religious, I do not own a bible, so at the time I wrote this statement, I held my other hand on the “Networking Fundamentals” book by Easttom II, William C. & Richard M. Roberts – hope that will suffice.

So let’s get it on with recording the facts about this summit and our meandering experience gathered there.

The decision and initial outlook of OSX Summit

It all began with an announcement spread around by our trustful framework and partner: the “Moldova IT Park”. It informed us that we have the opportunity to join their delegation. At the Outsourcing Summit and Expo (OSX) in London. Since we’ve never been let down by our Digital park, we’ve decided to attend this event, however, since I’m a bit neurotic, I dived a bit deeper into this and performed a quick OSX2018 review on 10times.com – just to check the estimated traffic of this event. The initial numbers were quite promising: 5000 to 2000 visitors and up to 100 exhibitors. 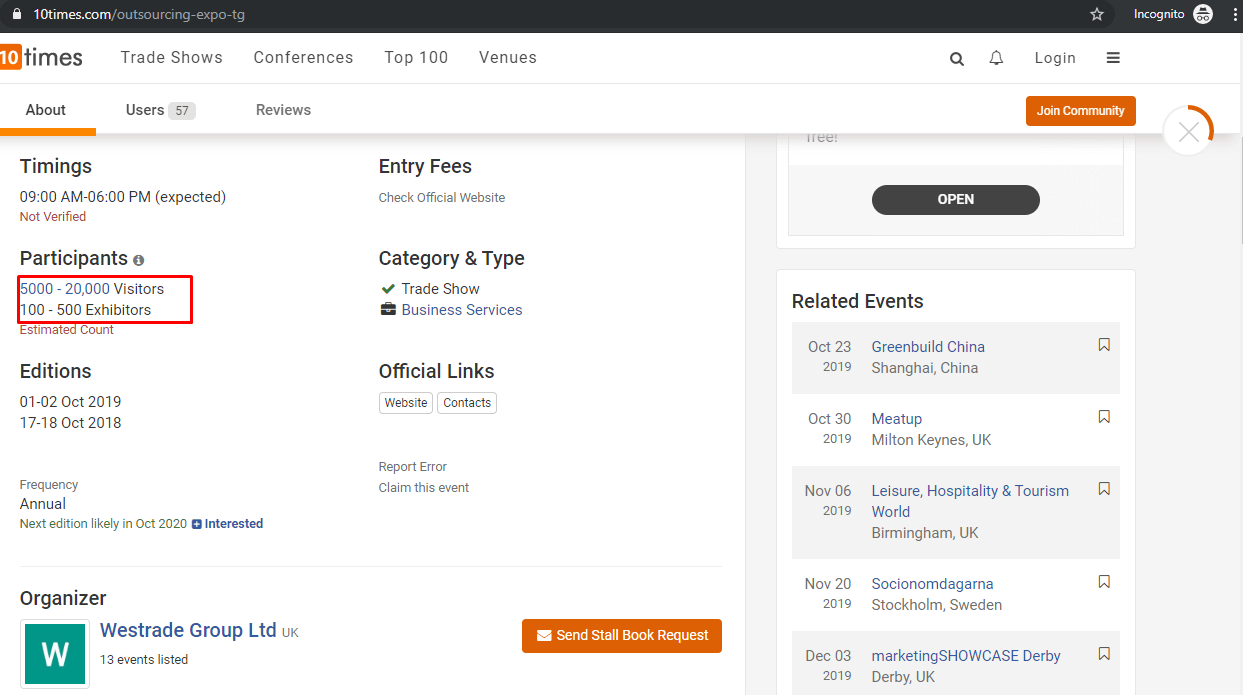 To make sure we were not getting drunk on still water I’ve re-checked these estimates via several third-party resources. Everything pointed towards an interesting event we must attend. They had a good social media standing for a first edition and nothing pointed to a concern cause. And believe me – I am able to find them even where there’s nothing. As soon as my lizard brain calmed down, I called a meeting with our business development team. We’ve decided to pack our bags, brochures, business cards and go.

Initially, everything seemed to be fine. We came in a bit early. Got our exhibitor passes and managed to rehearse our pitch and set up the booth ambience. We’ve enjoyed the background setup hum, noticing there are a bit under 50 exhibitors there. More traffic for us I thought – note this down like a silly thought. Aside the event setup, everything seemed on spot. We’ve met some of our finest competitors, found some hardware partners and took the European pulse of the outsourcing market. 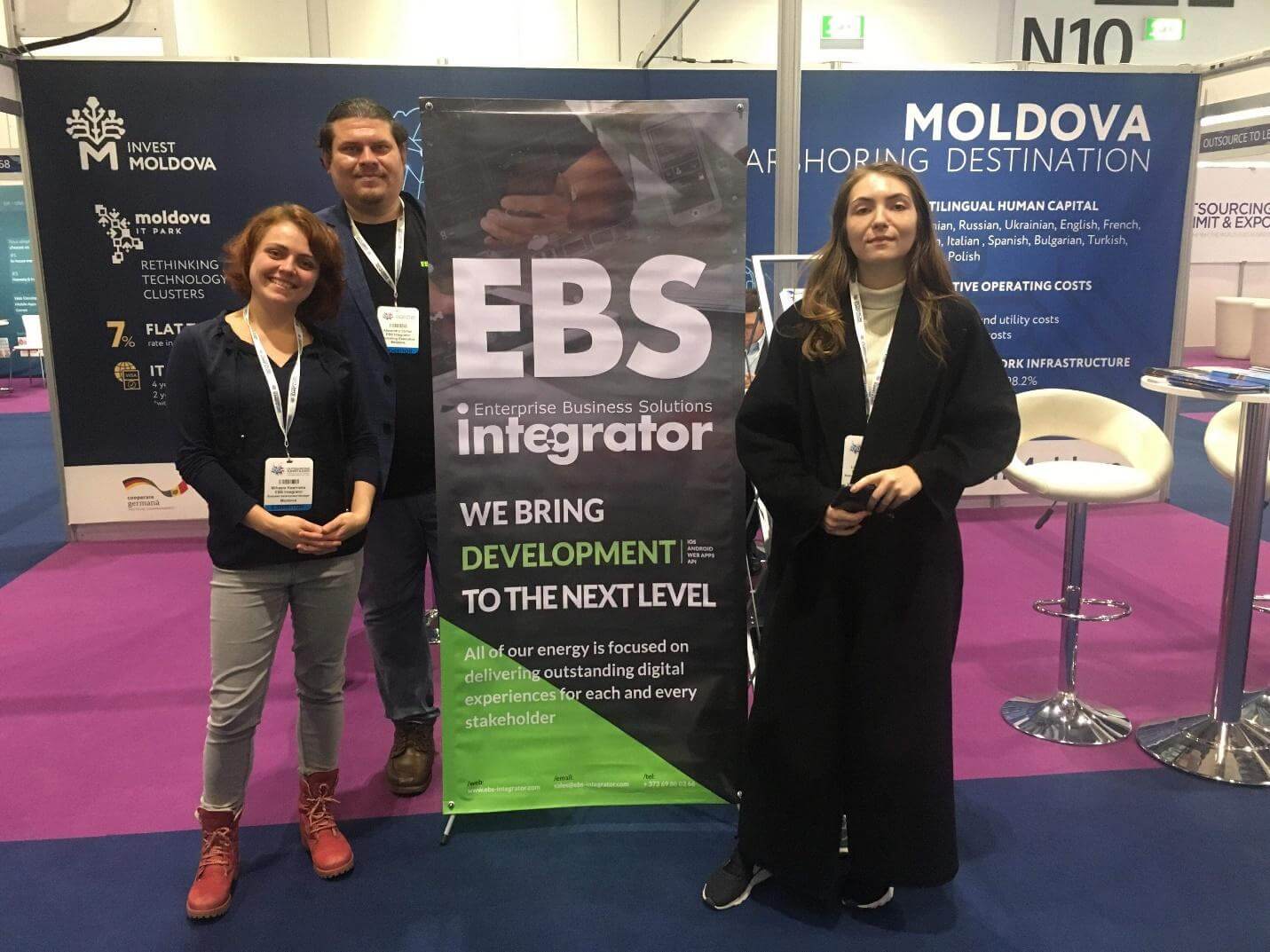 There was plenty of time to do that – Why? We’ll get to that a bit further into this humble blog post.

Aside everything that went to hell, we must admit, London’s ExCeL Exhibition Centre did not disappoint as a venue. Everything was at a walking distance. There were several expos we could attend without an entrance fee. And plenty of break options to queue in front of.

Everything was easy to find and you couldn’t miss any of the events. From the time we arrived there, we needed only 2 minutes to get to the registration desk. And another 2 for getting our exhibitor passes.

There were no annoying bag checks or security filters, no attendee corridors… Everything streamlined for maximum flow efficiency, without any congestion generating factors. All of the premises of a successful event were there. However, as you’re about to find out, OSX  Summit has been nothing of the sort.

Despite all of my confidence in numbers, expectations started to diminish as soon as I’ve noticed Microsoft’s #futuredecoded venue. Plenty of space, lots of traffic and to add insult to injury – positioned right next to the Outsourcing Summit and Expo space. At the time I assumed It wasn’t quite a degrading factor. The OSX’s delegate profile was quite different as compared to Microsoft’s #futuredecoded prospects.

Nevertheless, two hours after OSX’s opening, and  voila: the traffic advertised to our expectations’ benefit – 100 times lower. During 2 days of exhibiting we’ve had the chance to speak to about 20 delegates, out of which 5 were somewhat qualified for our business model. 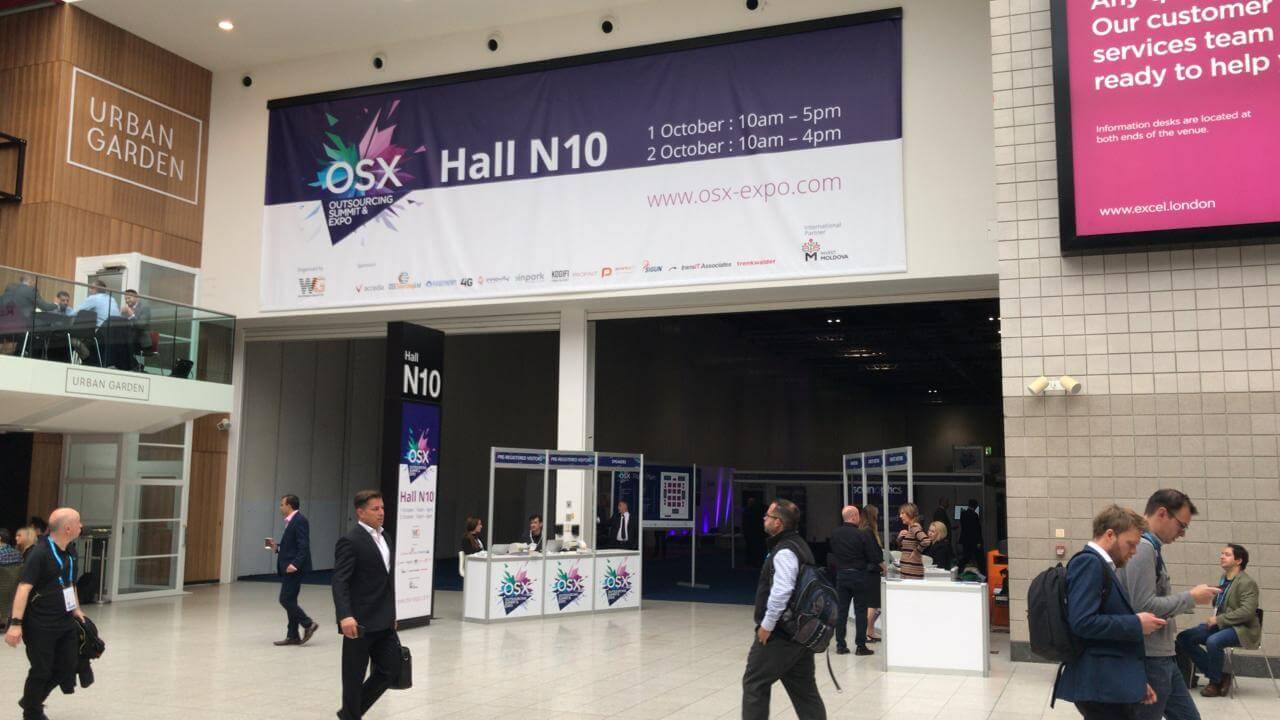 At the end of the day, the event turned into an exhibitor’s networking one, which is not quite bad. We have managed to speak to some potential nearshoring partners and got an idea of where the outsourcing industry heads. Also, we could attend freely any of the conferences without the pressure of missing any leads – courtesy of the low delegate traffic.

The ugly part of this expo has been experienced by speakers that filled-in OSX Summits Conference Programme. Their topics were the real deal, presentations have been delivered at the expected level, however, there were very few delegates to speak in front of. At any given track, the seats were mostly empty, covering maybe 30% of a stage’s potential.

For instance, in this particular picture, the entire audience was 4 people. Kudos to the photographer though, she made it a crowded place after all.

“How Outsourcing & Start-Ups Can Be A Great Combination” – Photo Credit: https://twitter.com/ExpoOutsourcing

Since there were literally no delegates to speak to, many of those seats got filled in by exhibitors. There were, of course, some exceptions, where 60% of the seating capacity was filled… However,that – quite a rare occurrence at the 2019th Outsource and Expo conference.

Speaking to dozens of exhibitors that have been there in 2018, this edition took an ill turn. Last year, the conference generated decent traffic and some exhibitors even got over 100 qualified leads in a day. My first guess is that the organizers placed their bet on last years audience and tuned down their marketing efforts.

To be honest, taking a second look at their communication strategy I’ve noticed there were only 6 tweets in June and some in August about OSX2019. On top of that, it seemed that no advertising neither re-targeting campaigns were set-up. From the day I got to their website, I haven’t seen an add on Twitter, Facebook or Google that would’ve aimed me as an exhibitor. To make the matter worse, the only email I received from them was the registration info: 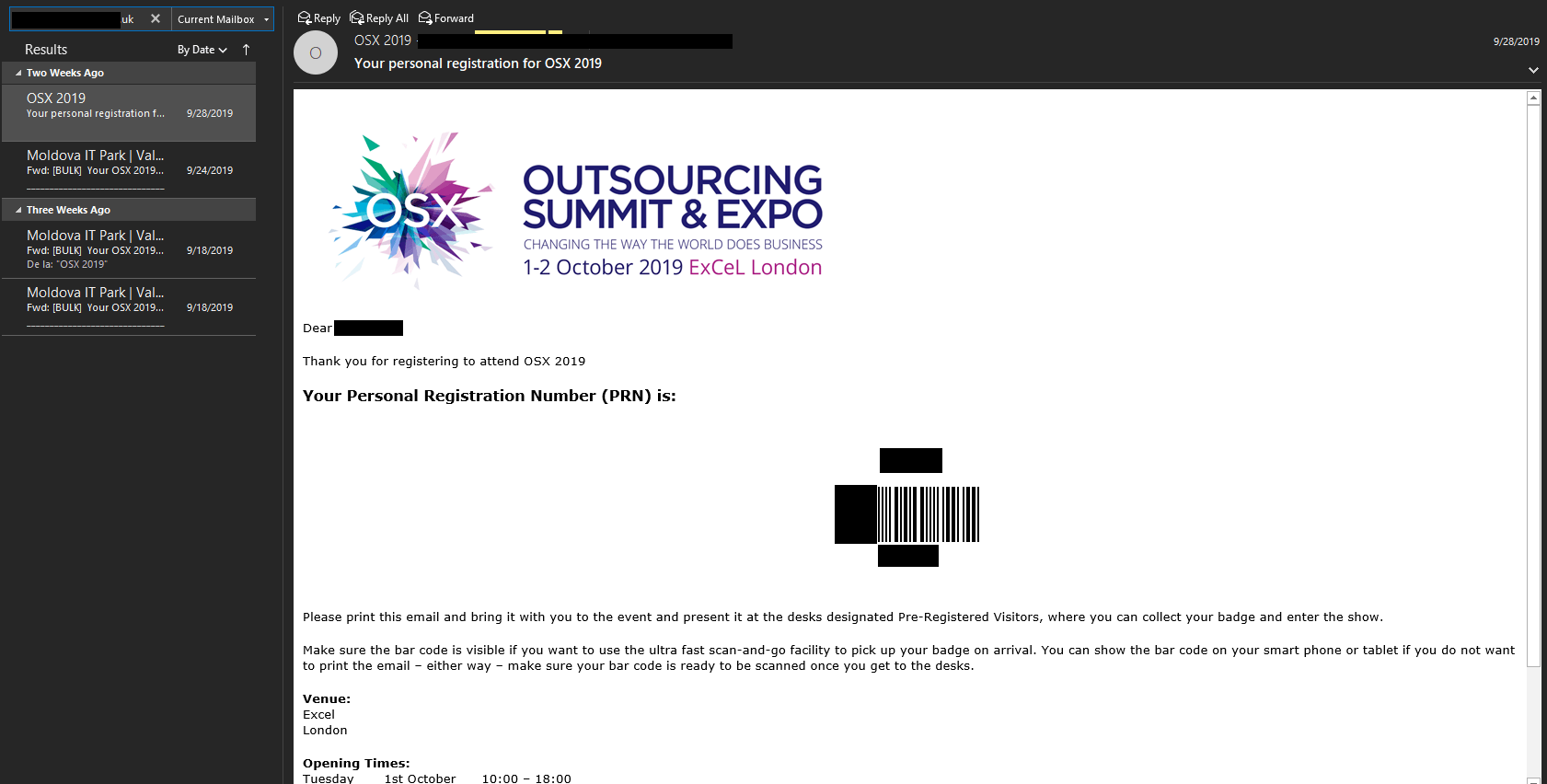 – no welcome email, no goodbye one, no “sorry for the bad traffic” one either. It would have made a difference and maybe, I would’ve stricken down this blog post altogether.

Let’s say that from my previous experience as a Business Developer, I would’ve never ignored any of my prospects, the way OSX ignored me. All of the above might become the last nail in OSX Summit and Expo’s coffin – after all, if exhibitors won’t receive some sort of giveaways, I’m not certain anyone would attend this event ever again.

Overall, in my humble opinion, the event has been a bust. There were maybe 40 to 100 delegates on the site and lots of exhibitors with broken expectations. To be honest I would’ve expected more from Westrade Group (the event’s organizer) and I’m not sure if OSX is going to get any momentum next year. If given the opportunity of exhibiting at Outsourcing Summit and Expo for free, I would not even bother – it simply does not worth the time or the effort we’ve put in.

On the other hand, we’re grateful to our local Hub (“Moldova IT Park”). We’re confident they have seen the same numbers we did, performed their own research and fulfilled our exhibiting needs with the best of their intention.  Yes, this one has been a bust, but I’m confident, we, as a community, have learned this bitter-sweet lesson and our next tries will be nothing less than great.