Flutter – the future of cross-platform or yet another “Google Glass”? 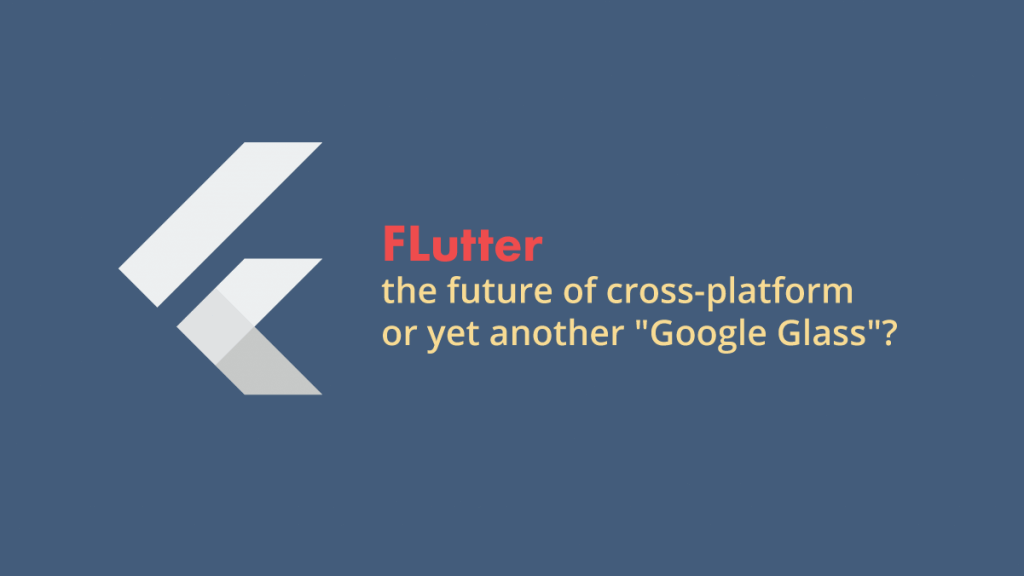 When talking about cross-platform, we’re still on the React native wagon. While there are quite a handful of choices, some lack the flexibility we need […] are proprietary […] or simply cannot suffice when achieving various business scopes. It is to mention that one framework caught our attention more than any other would have. Maybe because of all of the fuss it caused during Google’s Developer days in Shanghai last year. You’ve got it right. We’re going to write about what is Flutter and see if this one is yet another “Google Glass” service […] or if it worthy of your attention.

A SHORT DEFINITION AND SOME BACKGROUND 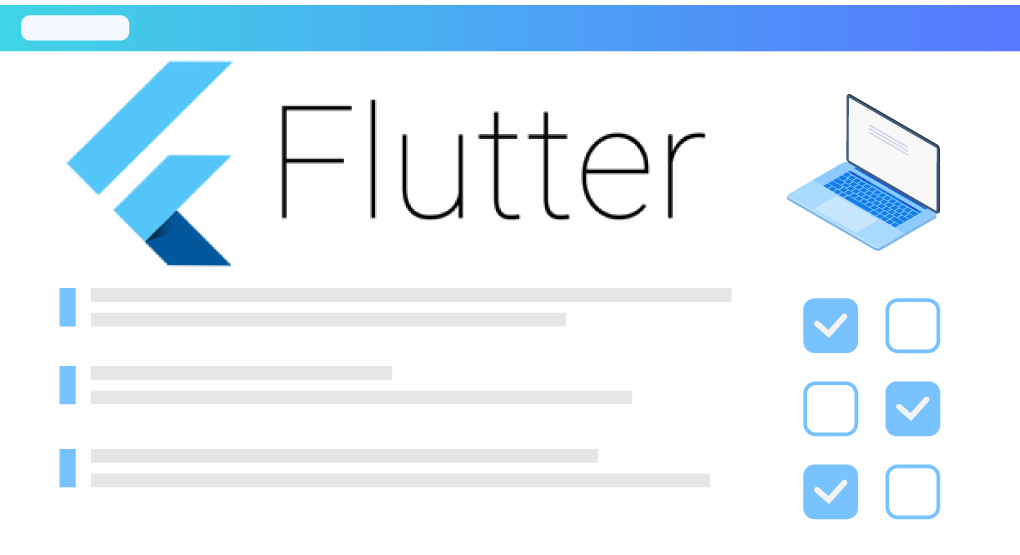 Flutter is a cross-platform framework that comes to replace native development. Created by Google as an Alpha in May 2017, the platform seems to have passed the public’s eye. Their beta got more traction than expected after Google’s Developer Days in Shanghai, back in September 2018.

De facto, Flutter’s story began as “Sky”. […] Unveiled back in 2015 at Dart developer summit […] the prototype was presented as a solution intended to enable rendering consistency at 120 fps within mobile applications. In two years, Google’s team decided to develop Sky as a multi-purpose solution that would also aid application development […] particularly for their mysterious Fuchsia OS, that is still in development to date. The framework got yet another popularity bump back in November 2017 […] when Google announced that Fuchsia OS supports the Swift programming language. That meant the new framework would also be able to produce applications for Apple’s iOS.

As a result, Flutter Alpha and Beta caught even more traction within the Open Source community, as a framework with increased chances to leap ahead a truly cross-platform paradigm, that delivers genuine mobile experiences, regardless of the user’s platform.

Flutter got even more buzz back in January 2019 […] when native Android App support has been confirmed as part of its codebase. Only a month later, Flutter 1.0 has been released as a stable open-source framework everyone could use… And that’s when we started “flirting” with it.

As a framework, Flutter is based on Google’s Dart platform. An object-oriented, general-purpose programming language that is used to compile desktop, mobile, server and web applications. On top of Dart, lies the Flutter engine. 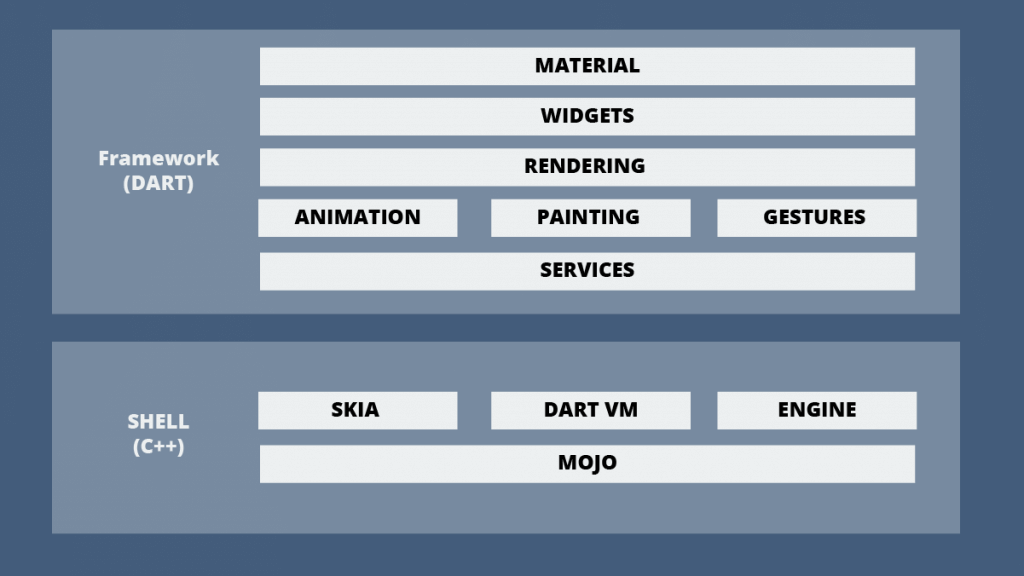 Written primarily in C++, this structure combines the benefit of low-level rendering via Google’s Skia graphics library. In addition, for both Android and iOS, the library features platform-specific SDKs.

This way, the Flutter engine acts as a portable runtime environment. It implements core platform-specific libraries, animation/graphics methods, Input/Output network methods, file management as well as accessibility support methods. Also, the engine is built as a plug-in architecture based on Dart’s runtime […] delivering access to an advanced compiler toolchain.

The toolchain allows Flutter to compile Dart code to C/C++ ARM machine code. Hence, the build resembles and acts as a native app […] eliminating the performance-related drawbacks, as well as compromises related to hardware access or specific platform OS features.

Besides its primary engine, Flutter makes use of a Foundation library, enriched with basic functions and classes. This enables building a native app, featuring both: various ready-to-use UI widgets and direct access to the application’s “canvas”. This flexibility made Flutter a base for other open-source frameworks, like Flame (a library used as a game engine).

WHAT MAKES FLUTTER APPEALING TO DEVS?

There are uncountable reasons Flutter is popular amongst early adopters. Here, we’ll refer to a shortlist a native developer would consider switching to this framework.

Despite its relatively young age, Flutter managed to gather over 25,000 GitHub stars. It might be because it’s a Google framework or simply because it follows on GoLang’s steps. 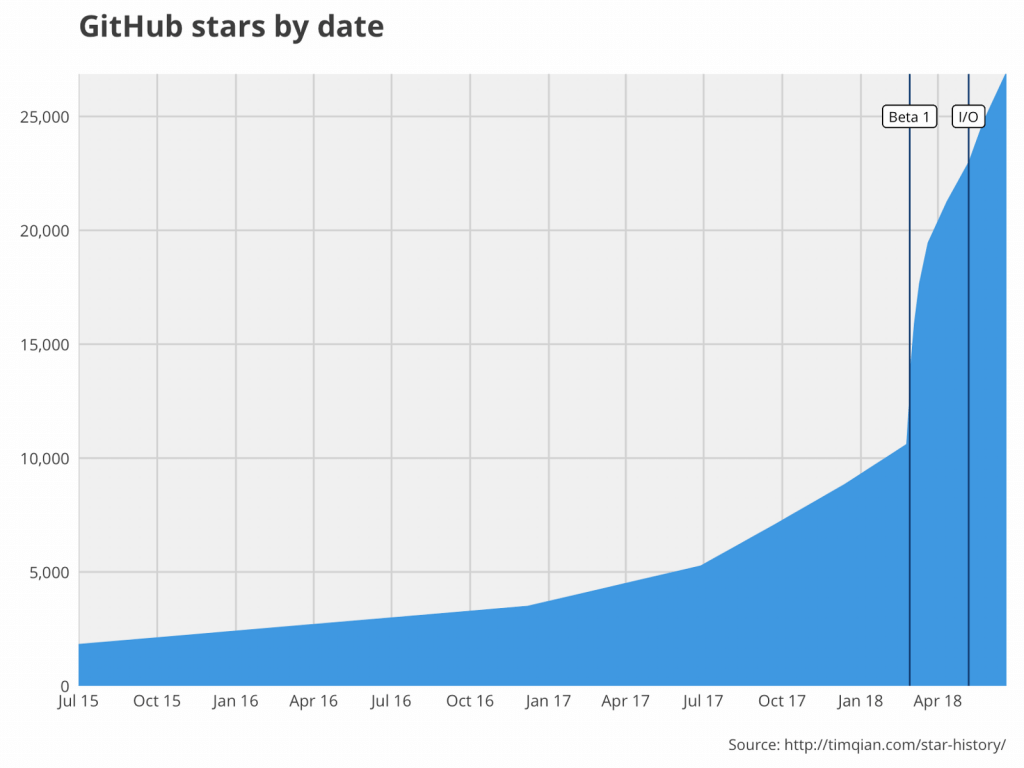 5 years ago people were quite sceptical about that particular programming model and were quite frankly afraid of implementing micro-service based solutions. Now, with IBM Bluemix, Lambda and AWS on the rise, it turns out that Google knew one or two things about heading to the future. Their software initiatives aren’t quite frankly the same as their hardware ones.

2. Simplicity as a rule

From installation to the compilation, things are quite simple. Compared to other cross-platform solutions, Flutter’s runtime environment is neat. You could actually dare to weight Flutter’s development processes against a native build. No other cross-platform can deliver a friendlier environment as this one does. On top of that, Flutter supports major IDE’s such as Android Studio, IntelliJ, or VSCode.

There are lots of goodies packed in this framework – goodies other cross-platforms simply lack. For instance, Flutter supports await/async features and streams or types. Its Dart core makes it easier for any developer that has experience with JavaScript, Java, C# or even Swift. This is one of the reasons this framework might stick in the long run. Pair that up with The Dart Code Formatter’s consistency premises, intuitive auto-complete options, out-of-the-box support for hundreds of ready to use widgets, instant run capabilities or source-code documentation available at one click away and you get a perfect development environment anyone would be happy to use. Just to add a few lines about the documentation: it is so well written that any web, Android, iOS or React Native developer will cross over with ease. 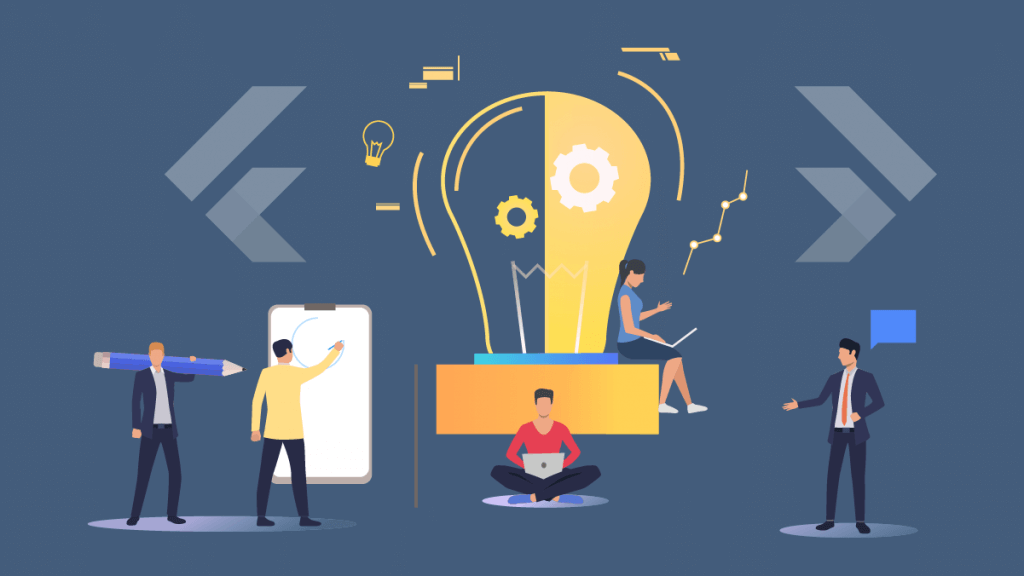 As compared to most performing cross-platform solutions on the market, Flutter is really good at managing dependencies. In addition, there is way less boilerplate code to write since you have almost anything needed to get you started from the framework’s foundation library. Again, since Flutter uses “simplicity as a rule”, setting-up a cross-platform project has never been easier.

Building multiple pages or screens for a mobile app has never been a bed of roses. However, Flutter manages to make a pretty nice impression here too. Unlike other cross-platform solutions, Flutter comes with yet another trick out of the box. All the full-screen views (or screens) are called routes and these are managed by a quite useful tool called the “Navigator widget”. This widget manages a queue of Route objects and provides various solutions to manage them, giving developers any tool there is to generate a native user experience. Heck, this puppy can even generate platform-adaptive transitions, without any additional code.

There’s a mention about it somewhere above, but this one deserves its paragraph. Flutter comes with a “Hot Reload” feature that makes a developer’s day. Simply put, this goodie allows a developer to see changes instantly as compared to waiting for Gradle or XCode to build upon or reflect them. For those that have to spend hours on UI – this is simply “a diamond in the sky”.

6. Less code to worry about 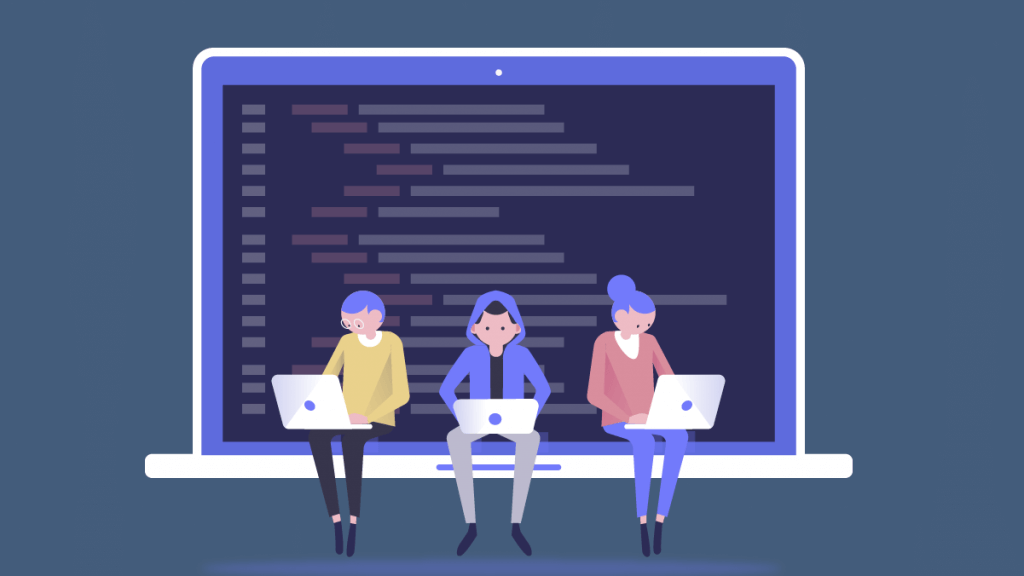 First, one of the most important gems here: if you managed to carry on your business scope in a flutter-based Android app, the code you wrote is 100% re-usable for iOS. Yes, there are some limitations for devices that carry an Apple bite, but if you made your way around them – that is it. You don’t have to write any additional code for the iOS twin.

Second, even when building native apps, you must maintain two separate layers: the actual code and the UI layout. Usually, XML or Storyboards define your layout, referenced into your code layer later on. Now hold on to your chairs. Flutter treats the layout and the code as a whole. Essentially, since everything ==  widget, and Dart generated your layount.

Both of these benefits result in less code, which in turn means fewer bugs.

If you need a quick-fix MVP, Flutter is the way to go. You won’t even have to compromise on UI limits. With most of the animations (like UI interaction feedback or button taps) integrated by default and, in some instances, available as a drag and drop… What’s not to like? In addition, since Flutter uses Material Design and Cupertino out of the box, you can build attractive UIs for your Android or iOS MVP at a glance.

Anything you build on Flutter will compile to ARM code, which places this cross-platform closer to bypassing bottlenecks, the latter currently being possible only in the case of a native build. While in its early days, this framework offers plenty now… Like a fresh super-hero around the block, Flutter just got its’ “powers” and I bet we’ll see more coming.

To conclude, in matters of future developments, Flutter does not have the potential of becoming the next “Google Glass”. With its promising roadmap, this framework has a lot to bring on to our digital tables (like true cross-platform apps that can run on Windows, Mac and Linux). However, it still has to pass the HighLoad and long-term production tests before it will settle in as a standard within professional software houses stacks. 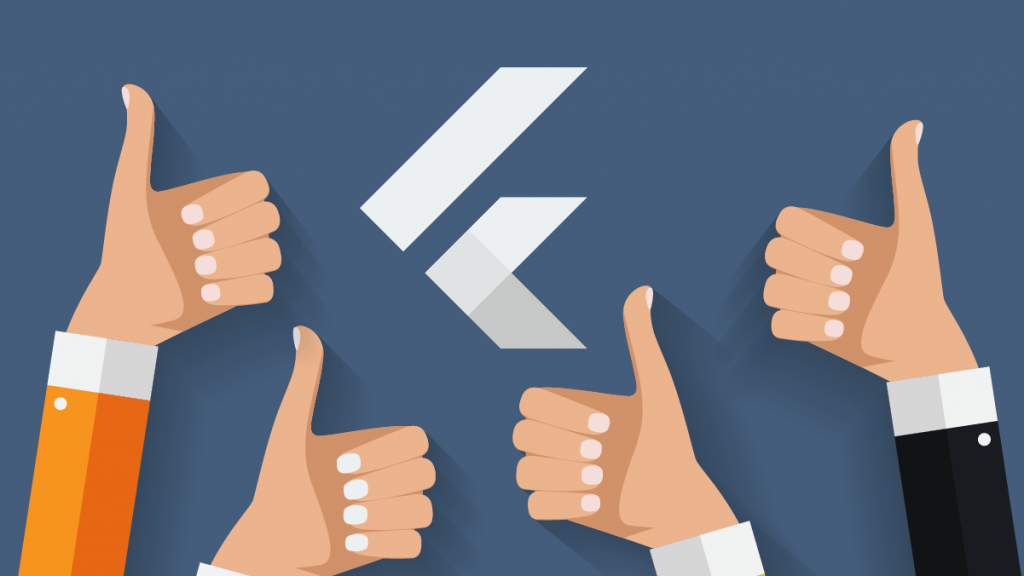 Flutter is an amazing tool and it definitely deserves some space in the toolbox of any mobile-oriented agency, but before that happens on our end, we still need to put it to a race against our current top-choice among cross-platform builds.

We’ll do that in our next post, so stay tuned. If you want to get a seat in the front row of that football match (and yes we mean soccer), follow us on Twitter, Facebook or Linkedin to get that one.

Otherwise, if you’ve also had the chance to flirt with Flutter, please share your experience. Maybe we’re too excited about it, maybe there are other things to consider or maybe we missed some of your favourite things about this newborn. For all of that, there’s a comment section.