How technology and software help us save the planet

Happy Earth Day everybody! Or at least it was on the 22nd, and in commemoration of this wonderful celebration, we decided to take a look on how technology and software helps us save the planet!

You might be wondering – “But isn’t technology what has caused the problem in the first place?” and that is a fair question! We’ll talk about this.
As a software firm we understand that technology is a two-sided coin. On one side it has caused problems like rapid climate change, acid rains and deforestation; On the other side however, we would argue it does as much now days to counteract those issues or work towards it!

Today we’ll use our fanboying over technology, software, and business trends for the greater good! All in the effort of spreading the word and awareness on some of the problems we as a humanity all collectively face; and how the brightest minds of our species try to remedy some of the issues!

Each story has a beginning

Our story begins in 18th century in Britain. – “What do you mean I don’t need to go into a history lesson every time I write an article? nonsense…” 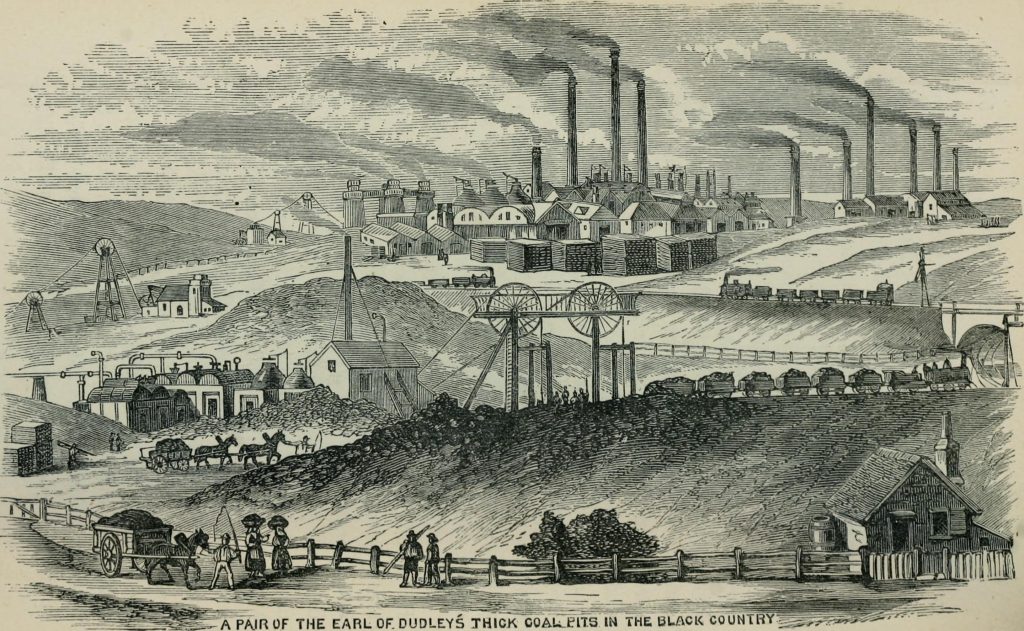 Industrial Revolution is the transition from a handicraft and agrarian economy to one of machine manufacturing and industry.

Rapid industrialisation enabled humanity to use new methods of working iron and steel; integration of new energy sources such as coal, steam, electricity, and petroleum as well as invention of basic automation.

The invention of new machines like the spinning jenny and the power loom later, enabled the very first programmable machines, consequentially birthing the first “programmers”.

Without going into a lengthy history lesson lets summarize.

But with “great power comes great responsibility” and the costs were tremendous; Child labour, factory related health issues, and…

What did it cost? Global Warming

Global Warming (often confused with climate change) refers to the long-term heating of the earth’s climate due to man-made problems, chief among them – excessive fossil burning and greenhouse emissions.

Largely measured from the period of the industrial revolution and onwards, as in merely the last 200 years humanity managed to detrimentally affect the climate more than in our entire existence combined.

This in turn has severe consequences for everyone on earth. Increased frequency of forest fires, loss of whole ecosystems, rising of sea levels, disruption of nutrient cycles, soil infertility, heat waves; just to name a few. 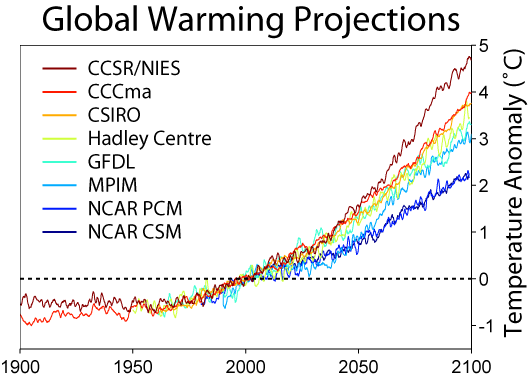 The lines you see are various scenarios the scientific community built upon available data, to try and make prediction models regarding where we’re going and what we could do. Still don’t trust the validity of the data? 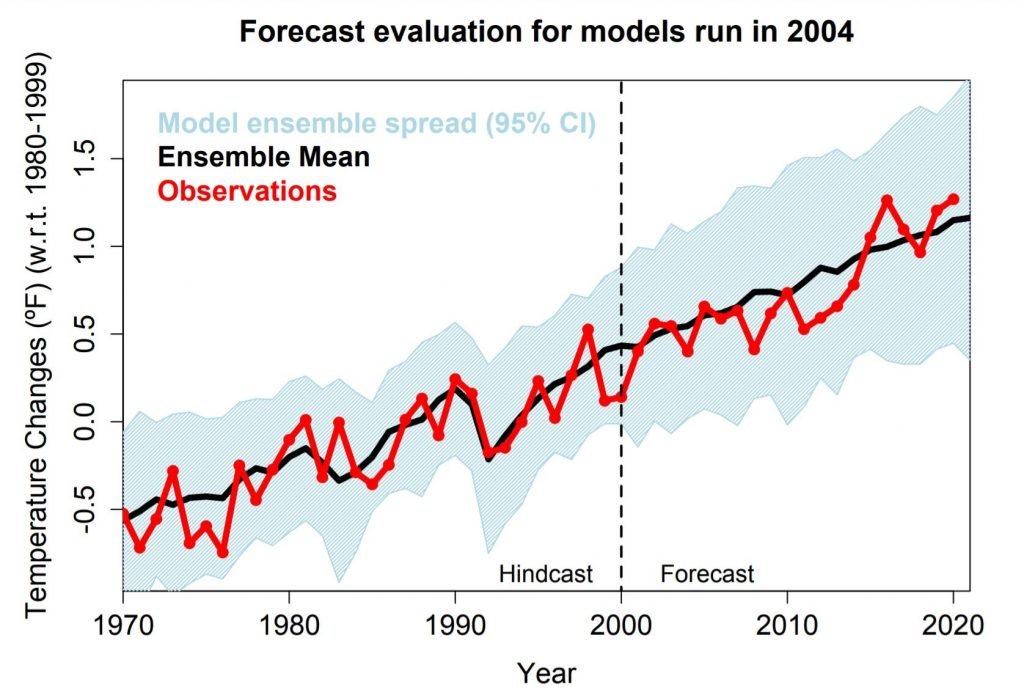 The graph you see is the direct comparison of predicted forecast made in 2004 and what actually happened by 2020. If you want a little bit more of a down to earth explanation – check out this video on the subject to get you started!

But enough with the scare tactics, things are bad, we all know that, but not all is lost! There are still ways to combat this and work towards a better tomorrow!

So, let’s celebrate the technologies that sprung up to combat the mistakes we all collectively made.

There are dozens of amazing incentives out in the works to date! We don’t want to say that one is somehow better than the other, so consider this as a list of things we think are awesome among other no less impressive stuff.

Technology to the rescue

The Scientific community is on a consensus that the rising average temperature can primarily blamed on greenhouses gases trapping radiation within the atmosphere.

Chief among greenhouse gasses is of course – Carbon Dioxide (CO2); And so, while some of the scientists attempt to fight politics on lowering their emissions; others took the road of “Capture and Store”.

One such project for capture and storage is the “Net Zero Teesside” (NZT) project.

NZT’s goal is to capture the CO2 produced in power plants and factories and transport it safely to offshore storage sites beneath the Northern Sea. 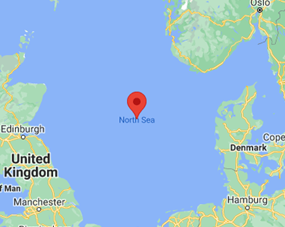 NZT aims to capture CO2 produced in industrial processes and power plants and transport these emissions by pipeline to offshore storage sites several kilometres beneath the North Sea.

Safely stored it will no longer contribute to the greenhouse effect and can later be, with further technological advancement, converted to usable fuel.

Speaking of; A relatively recent invention by NASA allows something like that!

In general, there are various technologies already in existence allowing us to convert CO2 into usable fuel sources, thing is, they are all relatively expensive at this moment.

However, humanity cannot sit around and do nothing, hence projects like NZT are springing up all over the world, if you want to learn more about Carbo Capture technology, I advise you to follow the wonderful people at co2captureproject.org!

When we think of climate change, we usually tend to focus on stuff like windmills, solar plants, energy cars and that’s all great, but how do developers/programmers make their input? 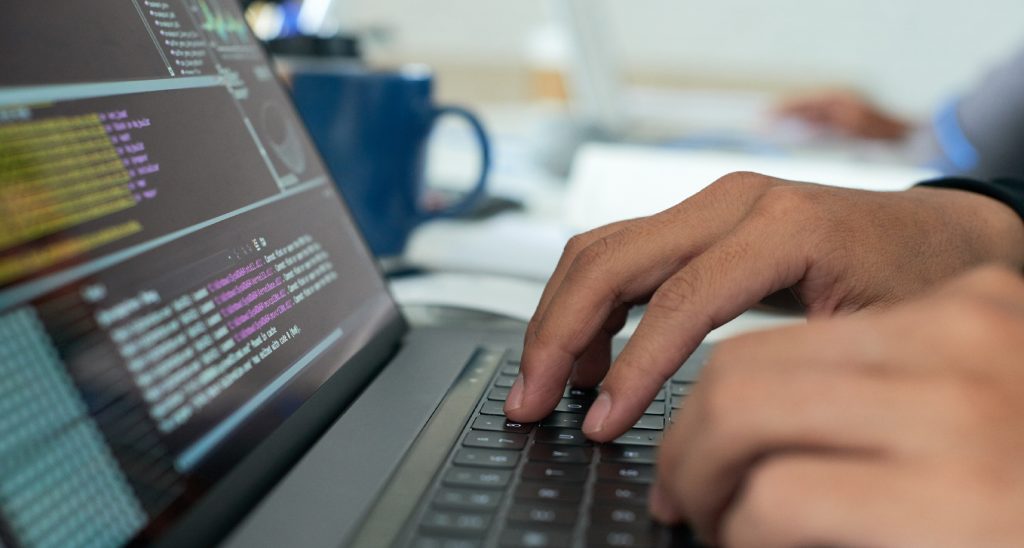 It’s no secret that software is already amazing at optimizing and cutting costs, things like CRMs, ERPs, WMTs etc; do exactly that! And using the same logic we can cut on unnecessary expenses in our fuel and energy consumption.

Data centricity and automation in general is key – we now live in an increasingly IoT world. Creating programs that can track this flow and cut on consumption is the best approach.

Tracking your carbon footprint, when and how much energy is consumed; even creating Artificial Intelligence to help and manipulate this data in real time; all this is possible and some of it is even done already.

Natural and renewable sources of energy like solar, wind and water are everywhere and are available for everyone; And one of the biggest challenges is bringing these various sources together into a functional, coherent whole.

You see, draughts, clouds and other irregularities prevent us from relying excessively on these sources, and that’s where Artificial Intelligence can help us.

By gathering and predicting this flow an AI can react with high efficiency and maximize the output. Seeing what sources are going online and offline, or when one recipient is increasing or decreasing the demand.

Only a machine intelligence can do this effectively and on the fly.

AI creates an umbrella effect on the diverse sources by interconnecting them for better load and storage.

What can I do? Apps to help save the planet

Download an app! Well, okay it’s not that simple but there is a plethora of amazing applications on the market already. Apps to look for:

Oroeco – helps you keep track of all the little things that you as a single person contribute to the subject, be that beneficial or otherwise. Things like your personal carbon footprint, how your diet and transport habits affect the climate.

Waterprint – another great application that focus primarily on water “expenses”; it’s a treasure trove of information on the subject and tells you how the water you use for cooking, drinking, washing etc. affects the climate, and how you can improve it. 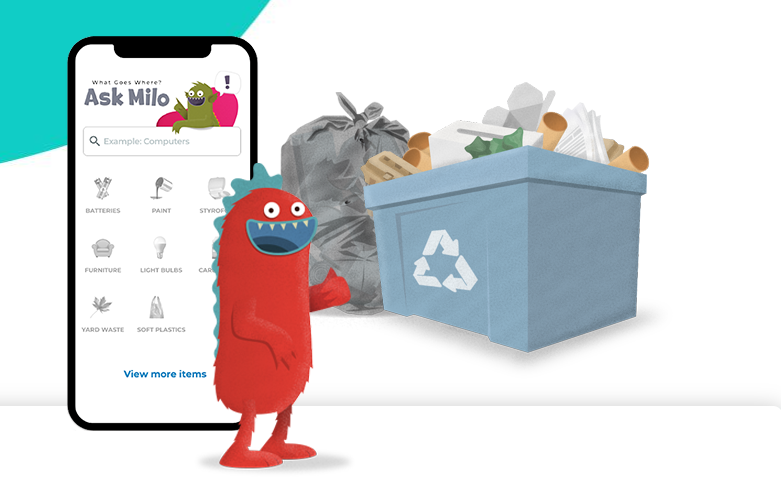 RecycleCoach – possibly the best recycling focused application out there; working with municipalities across the globe it delivers up-to-date information on waste recycling.
Everything from a huge database of what and how to recycle different products to various tips and customizable reminders is here.

Ecosia – not a mobile app, but an extension and a google alternative that uses ads we all love to hate and their revenue to plant trees! They take this very seriously for they know who they try to compete with.
And so, you shouldn’t be wary of third-party cookies, your information ending somewhere you don’t want. They also publish their financial reports monthly – full transparency!

And finally, something even easier than downloading an app.

Just work from home! We all hate how 2020 turned out for us, stuck in our homes, but there were massive benefits to the climate.

There was anywhere between 7 and 30 percent drop in carbon-based emissions during the worldwide curfew/lockdown!

Sadly, we couldn’t find any instances of anyone creating a full-fledged suite for all of this. And who knows, maybe you’re the next person who’ll have the next best idea on how to all make it gel together? We sure hope so, and we can even help you!

If you want to help more with climate change, we suggest you visit the wonderful people at the “Centre for climate and energy solutions”. And finally, possibly one of the most impactful things you can do to help save the planet is.. plant a tree.