Three weeks have passed since our team filled their backpacks with the bare minimum. We took off to Lisbon with lots of expectation and a desire to spread the word about who we are, what we do. All of it for the sake of technology tips and connections that would help us in delivering next-level services to our stakeholders. Web Summit seemed the right place to do that (at least at the time).

As first-timers, we’ve experienced it all: excitement, a bit of stress, jaw-breaking tech and lots of communication. To put it in numbers’ we’ve had 2900 minutes of dialogue with over 150 startups. We’ve made over 33 000 steps across the venue of the event, and learned at least 7 important lessons about the IT community in Europe. 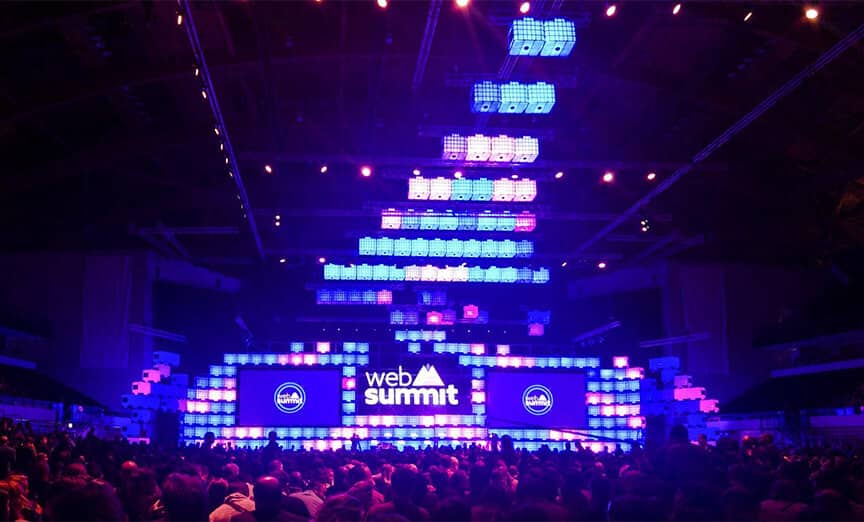 These two capitals are rightfully named as the “Silicon Valley” of the European IT market. These hubs represent a concentration of capital, talent and feature several support systems for IT startups. It’s worth mentioning that Europe’s “Silicon Valley” model took a shift from San Francisco’s approach. Recent years have proven that Europe’s startup ecosystem isn’t concentrated in one major hub. It is rather spread across EU capitals like Stockholm, Amsterdam, Paris, Dublin, Helsinki, Madrid and Lisbon.

Considering the opportunities spread across Europe, efforts, such as keeping in touch with stakeholders, grow into a challenge. for all ecosystem stakeholders. This might be the fuel that powers Web Summit’s scale and success. Web Summit is a place where industries can establish meaningful relations. Startups can build productive partnerships accelerating the IT’s pace within the community.

Choosing the right battles in solving issues is crucial

The Web Summit has been a host for everyone: the good, the bad and the ugly too. There were startups meant to solve minor issues, others focused on generic ones and a few of them have really upped their game. As expected, those focused on what matters got highlighted in the top-30 startup ideas exhibited at the event. As the Des Traynor, Commissioner for Competition noted: “You can’t solve every problem. Try to stay away from the small and the rare ones.”

Bigger fish like smaller prey. That’s has been an inalienable opinion of smaller players within the IT market for years, however, Web Summit seems to prove this theory wrong. We’ve noticed that large companies have shown considerable interest in working together with startups. Their main mission: hunting for Open Innovation. One of the main argument defending this position is the fact that corporations have been the main contributors at the Web Summit. The Mercedes-Benz’s contribution of 50 000 EUR to the web summit’s final startup competition is living proof of this. Their interest in learning more about what startups have to offer was visible at every corner and the hunt for “the next big thing” got quite fierce.

It’s mostly about people rather than technology

We’ve learned that most successful startups are not those powered by the best technology or the best system architecture. The golden nugget gets defined by their impact on a human-related issue. This held the event’s main headlines. Considerable interest followed exhibitors and speakers without particular experience in IT or coding. Design, health, music, content and marketing converged with engineering, security, and enterprise areas. These ones got top of-the-shelf attention. This is immutable proof that computers, data, apps and digital solutions have entered all fields of our day-to-day life and are no longer “a nerd’s tool”.

It’s no coincidence that most of the talks were about ‘taking back’ and re-gaining consumer rights over privacy. Since confidentiality is paramount in a world of data, customer trust must requires it by default. At the same time, privacy implies a dilemma. As Mr. Joel Spools (CEO of Stack Overflow) noted:
“Curiosity drives the demand for innovation, but if users increasingly want their information to be out of to be out of view, technological advances will suffer as a result.”

On the other hand, the industry can be tailored, as Bryan Johnson (founder of Kernel) stated: “The single greatest thing we can do is to improve our adaptability.” Weighting both circumstances, the best way out is to build trust while following the new rules. Eventually, innovation will catch-up.

The web powers globalization and contributes to the overall growth

Web Summit reinforced the above statement with hundreds of examples. By simply browsing through booths you could see that anyone, anywhere, could come up with an innovative idea and business process. Each of those startups have an equal chance to compete on fair terms in an open environment powered by the web. Their access to talent, finance, either their business know-how might differ, but everyone can succeed and scale-up. The web has made it possible for each and everyone to collaborate on a new level, enabling growth and erasing borders all across the globe.

Of course, each attendee has its own lessons gathered at the 2017th event. We’re not saying these are the top 7 things for everyone to learn, however, these were those that made us wow, think and adjust. If you ever attended #WebSummit, what were your main learned lessons? We’re eager to find out, so ping us in the comment section.